I've nearly finished the converter replacement in the trailer, but I needed to get some bolts from the hardware store, so I had a good excuse to put that aside and work on the B190. I got the old, rotted wood all out! Next up, making replacement wood for the ceiling.

I've attached some pictures from removing the fan and starting the work, and today. 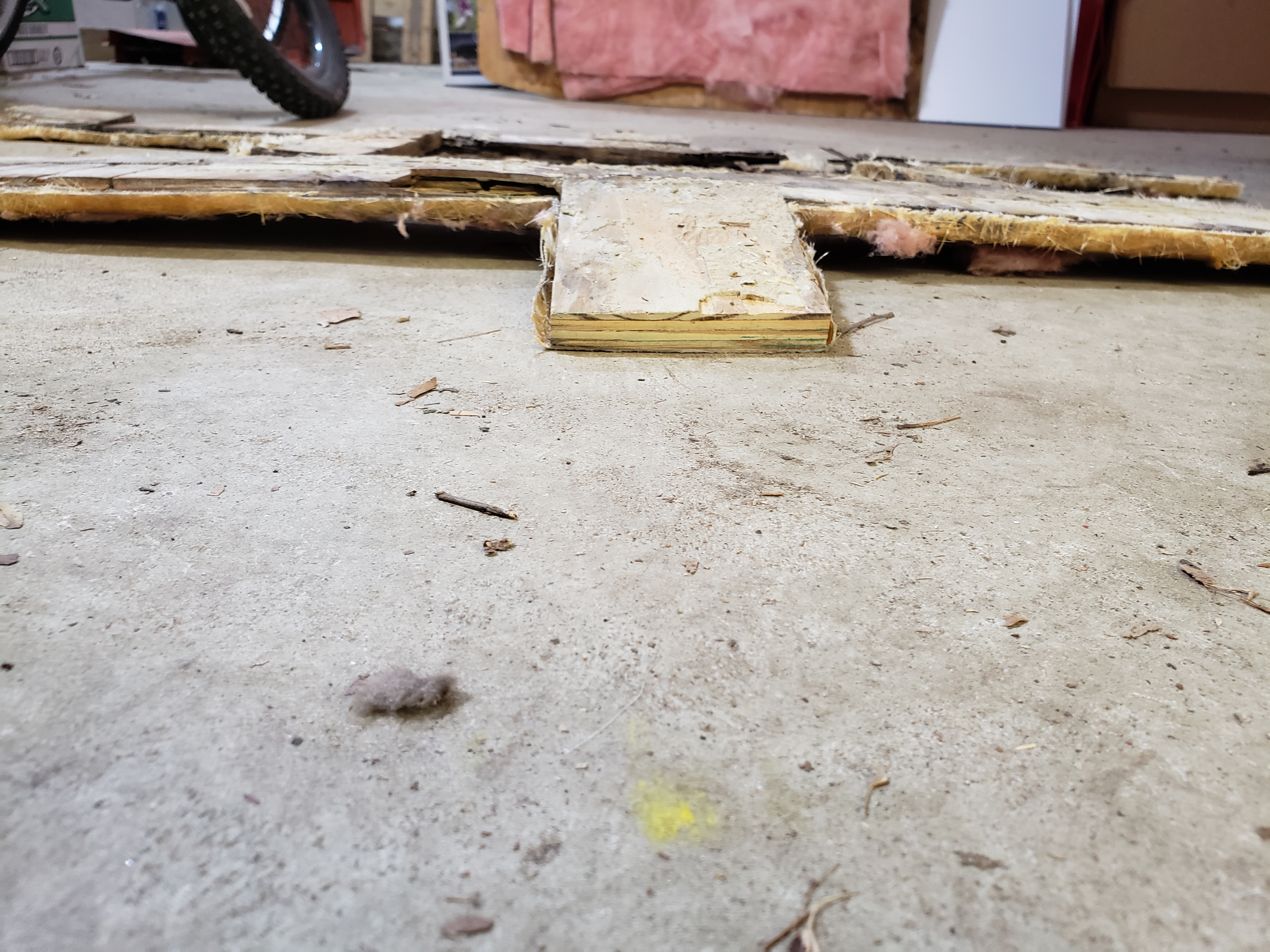 Got some more work done to the B190 this weekend.

Friday, we went to Metal Supermarkets to get some aluminum. We decided that we wanted to finish the interior ceiling in aluminum, in honor of it being an Airstream. We had two options - one is a thinner veneer with a wood backing, essentially a direct replacement for the original mouse fur, or getting aluminum that was thicker and having just aluminum as the ceiling.

Unfortunately due to COVID restrictions, they aren't allowing customers into the warehouse, and I wasn't able to adequately convey that the thickness of the aluminum wasn't critical - they matched what we had in the wood, but what was actually important was the level of flexibility. Without being able to pick up a piece and flex it a bit myself, I wasn't comfortable going the thicker-aluminum route. So, instead, we got a 4x8 sheet of 0.040 Aluminum (should have gotten two, but they only had one).

Then it was off to the lumber yard to get .25" Lauan plywood to replace the old stuff, and a batt of insulation, R-15. I used the original wood as a template and cut out the plywood, then marked up the sheet of aluminum for cutting. Unfortunately my metal snips weren't up to the task of cutting the aluminum - the aluminum had to flex too much. I just received metal-cutting blades for my jig saw today, so I'm ready to cut that.

To cover the joint between the two pieces of aluminum (and wood), we decided to overlap the second piece with the first one. I'll cut the first piece about 1.25" longer than the board, then drill holes for rivets in it. Then after we install both pieces, I'll put rivets across. This is exactly what our trailer looks like as we remove the vinyl ceiling, and I think it'll look really cool.

I plan to glue the aluminum to the plywood, then put in some pop rivets to make it look Airstreamy. I'll then glue the insulation to the top of the plywood, and it'll be ready to go in.

Sunday had better weather than I expected, so I was able to finish cleaning the caulk off the roof and clean it up, so that's nearly ready to put the fiberglass filler in (I plan to do that to fill the holes and scratches). I also cut wood to replace the pieces I had to cut out of the ceiling due to rot (I already cut the piece that goes directly under the fan a few weeks ago; these pieces support the sides and front). I started putting epoxy on them in the hopes that any water that gets in doesn't wreck the new wood. I'll let this cure then flip them over and do the other sides of all wood...then it's ready to go in...

We've decided we're going to replace the sewer vent, because the caulk on that looks like a disaster. I got one today for that job. We've also decided to just go ahead and replace the bathroom fan while we're doing all this work - the original fan is in really bad shape, and Maxxair makes one that is ~$75 and has an LED light integrated into the trim. I'm hoping neither of those involve replacing rotted wood...
1991 Airstream B190 - bought, 2005; sold, 2011; bought 2017
1995 Airstream Excella 30' trailer

Wow, that sounds great! I can’t wait to see the aluminum ceiling.

Awesome! I am almost done gutting my van today. Looks like some of the wood that the roof rack is screwed into is rotted. Are you planning on re-fiberglassing the new pieces back in?
Ryon Downs
@Nauty4Nature on IG
The Nautilus: Roaming Land Submarine
1991 B190, 39k miles, gunmetal grey
2007 Yamaha WR250F
2008 Lifted Subaru Legacy GT
Top

Nautilus wrote: ↑
Mon Apr 12, 2021 1:19 am
Awesome! I am almost done gutting my van today. Looks like some of the wood that the roof rack is screwed into is rotted. Are you planning on re-fiberglassing the new pieces back in?

I'm not - I don't think the fiberglass is critical there. Others have done it, though, so opinions vary, of course. I haven't done fiberglassing and didn't particularly want to try to learn a new skill in the hardest way possible (upside down). The construction adhesive is what's holding the wood in place.

I haven't updated this lately, but work has been (slowly) progressing.

The replacement wooden supports are glued to the ceiling inside; the new fan is installed outside. I'm now working on the interior ceiling to get that all back together. I've decided I want to get some metal reinforcement plates like this to kind of tie the roof pieces together. I got one sheet of aluminum a few weeks ago, and last weekend I was finally able to cut it - I had tried using metal shears, but that wasn't going well. My brother suggested a tool like this (in fact that's the one I bought), and WOW it's amazing. It's fast and easy.

Next up for the roof - glue the sheet of aluminum to the Luan I got a few months back. I want to think about how to do this in such a manner that I do not get waves. I may buy or rent the type of roller they use on vinyl flooring. I also need to pick up another sheet of aluminum; I'd planned to do that Friday but our truck was in the shop. But it's probably good that was delayed, because...

Now the bad news. I thought mine didn't have a rear brake light. Turns out it did, but there was a blank plate covering it. I always assumed the blank plate was sealed to the van, but it was actually just slid over the actual brake light fixture. And the light was leaking, badly. The wood underneath the medicine cabinet is completely rotted. What actually caught my attention was that the closet floor (the upper floor where we put our clothes) was a wavy mess - the damage goes at least around the corner there. So the rear of the van has to come out and be redone. Sigh. I should have known, though. I saw the signs of leakage and didn't investigate. No one's fault but my own (to be fair, it probably was leaking even when I bought it back, and most of the damage was probably already done).

But it's an opportunity to remove more mouse fur and replace it with aluminum, so it's not all bad!