Replaced ceiling in front of van

Restoring a B190? Start a thread here so we can follow your progress!
Post Reply
6 posts • Page 1 of 1

Replaced ceiling in front of van

The previous owner had some leaking around the fan in the front of the van and after a couple years of my ownership the silicone repair work failed and I had some leaking again at the fan. Once I started looking around in there it was clear that 1) the plywood around the fan was shot, water damaged, and 2) the pink insulation had been used by mice as a cozy home for some time in the past. So I pulled out the front panels of the ceiling, put in some insulation and sound deadening, and closed it up with plywood hung on furring strips. 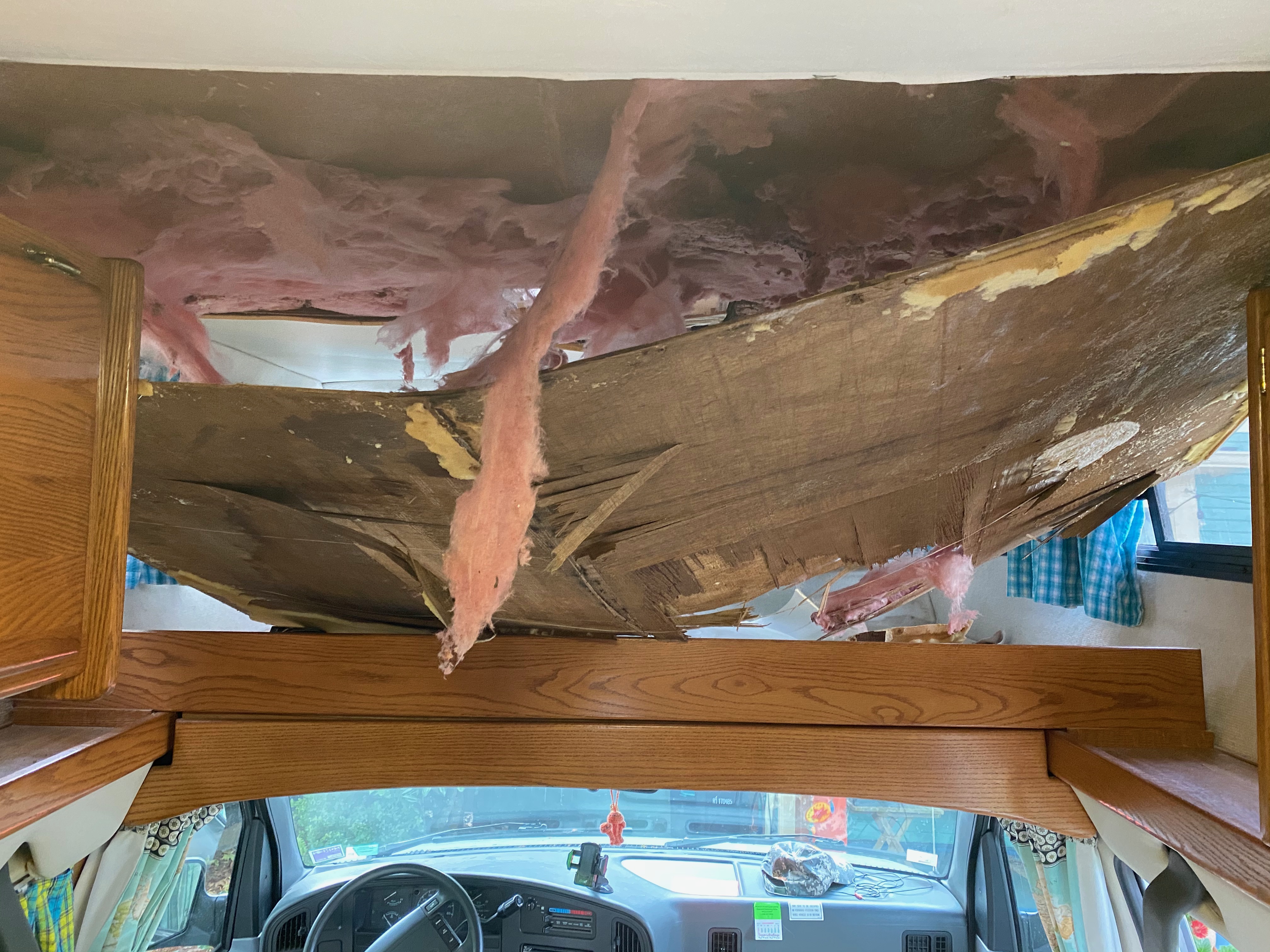 The old panels and insulation were kind of gross, but I was able to salvage the plywood for making a template for the new ceiling. While Airstream was able to use a full side to side panel, that was probably during construction and prior to the van being full of built-ins--I couldn't fit a side-to-side ceiling panel in, so I had to cut the replacement ceiling into four panels. 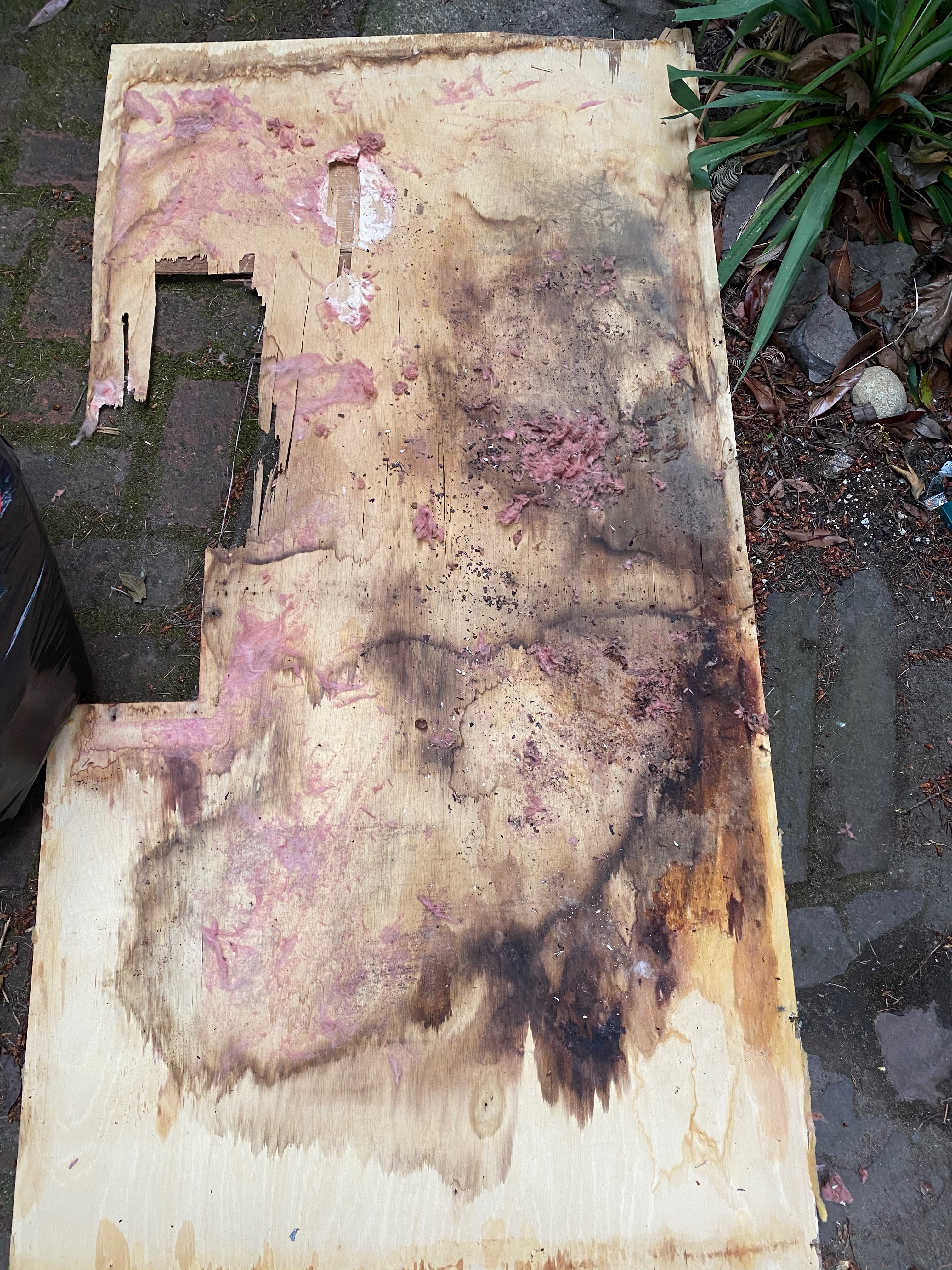 I thought that 1" poly board would fill the "honeycomb" voids, but it was thicker than it needed to be--1/2" would have been fine, but I wanted as much insulation up there as I could get without lowering the ceiling from the original. The fiberglass work on the inside of the roof is pretty rough, so instead of breaking off all the threads near the edges of the insets I used spray foam to fill the gap at the edge of the poly board. I figured out how to use the Great Stuff can pretty well (go SLOWLY) and covered most of the bare fiberglass except the side-to-side section right at the front, near the front window. I probably should have done that, too, but was out of Great Stuff and lazy. Then I attached some 3/4" ply furring strips to the ceiling with Loctite PL Max Premium (https://smile.amazon.com/gp/product/B07 ... UTF8&psc=1), which was a slower process than I anticipated because I had to keep pressure on the strips until the adhesive dried; I left the supports on overnight. Any foam that had expanded down past the furring strips I cut off with an oscillating tool, which I also notched the plywood strip around the fan with to allow for the wiring to get through without being pinched. I then put EZ Cool insulation (great company for working with, they even include a knife and foil tape!) (https://smile.amazon.com/gp/product/B01 ... UTF8&psc=1) over the entire thing to increase the R-value, cover any areas that were just fiberglass, and make it look cool and space age for whomever disassembles it in the future. 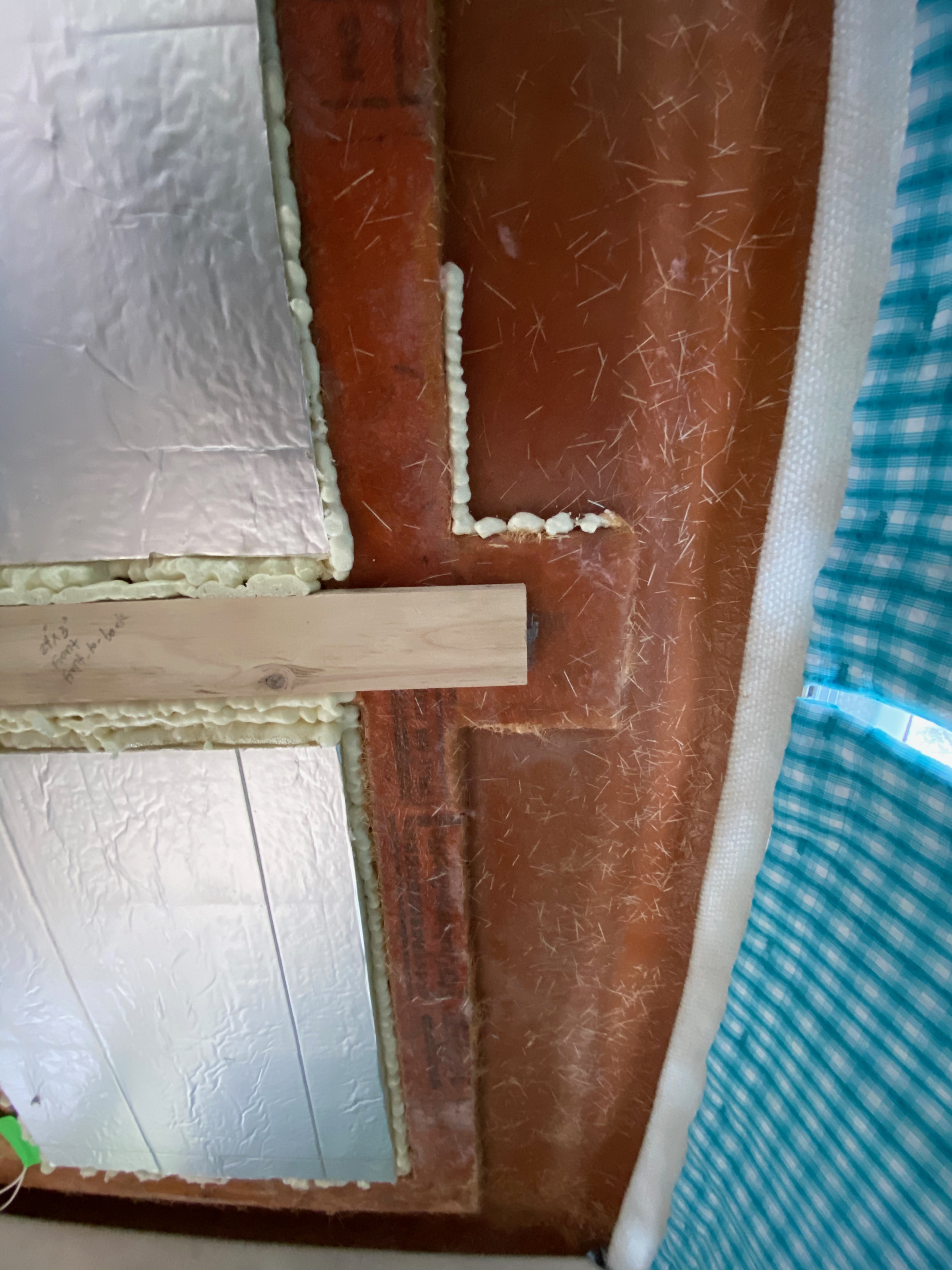 Note that I didn't take the side-to-side furring strips all the way to the end, nor did they go all the way to the old ceiling at midship. I also didn't put spray foam there. This was to allow for enough room to allow the ceiling panels to flex with the curve of the roof and intersect with the top of the walls, as the former ceiling was basically floating on the edges riding on the wall panels.

I put up the ceiling panels, which matched up pretty well. There was something about the ceiling that was asymmetric, such that the seam was slightly out of alignment from the front section to the back. This necessitated using a wider stock to cover the seam. Because COVID has messed up lumber supply chains, none of the chair rail that I wanted to use was available, so I used a table saw and router to mill down 1x3" oak.

In final assembly, it would have been nice to have a furring strip to attach to on both sides, but again, I thought that would prevent the panel from fitting correctly above the wall. But it also meant I that I probably needed a side-to-side strip that I didn't have--because of the way I divided the ceiling into four panels, having the fan split between two, the side-to-side seam was over the poly board, not the fiberglass to which I could attache a strip. In retrospect, I think having the vent hole split by all four panels would have been the best way, thereby allowing for furring strips in all directions.

As you can see, at the edges it's hard to keep the trim attached to the ceiling panels--I've got two small screws in each trim piece there, but they are only into the panels, there is nothing else backing them. That's the biggest problem I know of. But it's not a big deal and I don't think other people would notice it (much). I also took the opportunity to take apart the fan, clean it, and get the fan cover crank reattached correctly. It cleans up nicely, and wasn't too hard to do. This whole ceiling project was spread over Fall to Spring, after I had sealed the outer leak on the roof, which I'll post on a different thread. It wasn't too difficult, but like any project it got bigger and there were lots of steps involved. Thanks to the folks who posted their ceiling work here--that made it easier to know what I was getting into.
Top
Post Reply
6 posts • Page 1 of 1